《Chinese Xian JHU-6》The H-6U aerial refueling tanker was unveiled during the 10/1/1999 parade, finally putting to rest the speculation about the existence of the type. The introduction of the tanker variant of the H-6 bomber, as well as the refueling-capable J-8D, signifies a new ear era in PLAAF. By extending the legs of fighter aircraft, the PLAAF can effectively project power further beyond its borders without the need to establish bases in the forward areas. However, Western analysts have not been impressed with this aircraft, citing the relatively small size of its payload as a limiting factor in the number of aircraft it can refuel in one mission. The ROCAF does not possess aerial refueling capability, despite the F-16 Block 20 MLU having retained its refueling receptacles

See on Ebay »
Shipping to: Worldwide
From: US-Merrimac,MA,USA
Store: baronvonplastic 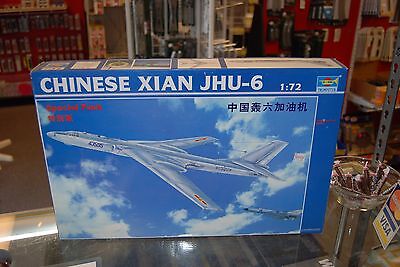 See on Ebay »
Shipping to: Worldwide
From: US-Lakewood,WA,USA
Store: Online Trains and Hobbies

Showing 5 of 10 results found at Ebay. Click here to see all.