This playset by MPC was contemporary of the early versions of the Airfix “Coastal Defense Fort” playsets. It contains the same base and gun emplacement, and Sherman tank, a Tiger I tank, and the initial Airfix version of the German Infantry (If you ever have seen this figures you should take a look at PSR here). Note than on later Airfix releases of this kit, German Infantry was replaced by the new model , and usually also British Commands are on the sets, but this MPC version was only produced at the time (1973) and don’t include these.
These kits are very hard to find, specially on good conditions, and you can expect high prices for them.
We are adding this entry just for collectors purposes. 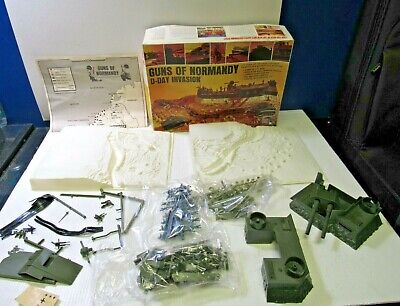