By early 1954, the MiG OKB was involved in a design programme with the objective of developing a comparatively lightweight interceptor fighter capable of attaining Mach=2.0 and altitudes of the order of 20,000m. At this time, the respective advantages of two favoured configurations – the thin, highly sweptback wing and the pure delta wing, both mated with slab-type horizontal tail surfaces – had still to be resolved. The OKB elected, therefore, to build aerodynamic test vehicles in parallel utilizing both configurations, the first to fly being that with the sweptback wing. Referred to as the Ye-1, this aircraft was originally to have been powered by an AM-5A turbojet. With the availability of the AM-9B engine of 2600kg and 3250kg with afterburning, the airframe was modified to take the more powerful unit, and, armed with two 30mm NR-30 cannon, was flown as the Ye-2 on 14 February 1955. As no clear advantage between the Ye-2 and the delta-winged Ye-4 was immediately obvious, an additional prototype of each configuration, the Ye-2A and Ye-5, was ordered, these having the Tumansky-developed AM-11 (R-11) engine of 3800kg and 5100kg with afterburning. The swept-back Ye-2A flew for the first time on 22 March 1956, and a pre-series of five more aircraft was built – these being provisionally assigned the designation MiG-23 – for evaluation purposes, but, in the event, the delta-winged Ye-5 was deemed to offer marginally superior characteristics and was chosen for large-scale production.Source: www.aviastar.org 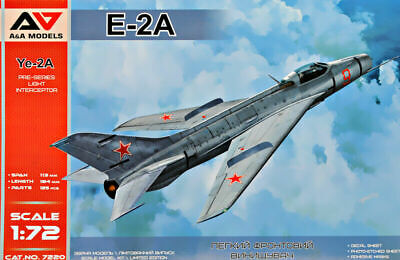