The issue in November 1951 of a specification for an all-weather fighter capable of mounting standing patrols led the Lavochkin bureau to undertake some redesign of the La-200. The side-by-side seating for the two crew members was retained, and the centre and aft fuselage were comparatively unchanged, but the forward fuselage was entirely redesigned. The extreme nose was formed by a large dielectric radome of more than 1.0m diameter. The early single-antenna Torii-A radar was replaced by a large RP-6 Sokol (Falcon) radar with three different scan modes, and twin ventral strakes supplanted the single strake of the second La-200. The additional fuel required to achieve the specified endurance was provided by increasing the capacity of each underwing tank from 1120 l to 2650 l. Two 3100kg Klimov VK-1 turbojets were installed, the forward engine’s air being supplied through a chin intake and that for the aft engine being provided by “elephant ear” type intakes on the sides of the extended nose. Armament remained three 37mm cannon and the first flight test was made on 3 July 1952, a mock-up of the Sokol radar initially being fitted, tests with the radar installed commencing on 10 September. An extensive test programme was conducted, but, in the event, the competitive Yak-120 was selected to fulfil the requirement.source:http://www.aviastar.org

See on Ebay »
Shipping to: Worldwide
From: UA-Ukraine
Store: UkrScale 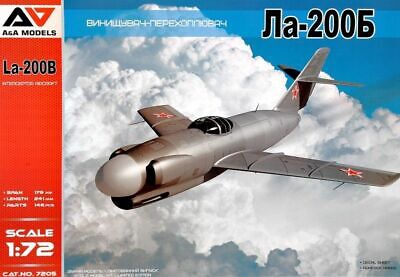 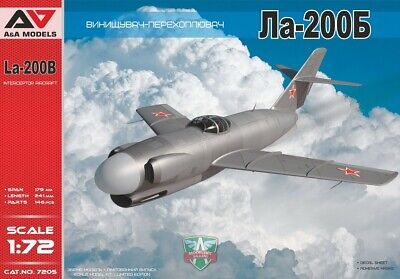