MBV-2 with 76,2-mm tank guns L-11
Motorized armored railcarMBV-2 was manufactured in the USSR in 1937 at the Leningrad Kirov Plant with use of units and aggregates as well as gun turrets of the T-28 medium tank. Motor armored carwas completely armored motor car with mixed armament.

Turrets had an elliptic form with a rear recess. In roofs there were two hatches – the round hatch of the gunner with mounting for an antiaircraft mount ring and the rectangular hatch of the commander of a turret. 76,2-mm guns were set in the front part of turrets, separate spherical mantlets of the DT machine guns were placed to the right of them. After 1938 instead of KT-28 guns MBV-2 has been rearmed with the new 76,2-mm guns L-11, mounted in masks of T-28 turrets. MBV-2 was also armed with 10 machine guns: four 7,62-mm machine guns “Maxim” in spherical mantlets (two from each board) and six 7,62-mm machine guns DT located in turrets and in hull. Antiaircraft arms of MBV were made by the M4 quadruple machine-gun mount sample of 1931 and 2-3 more DT machine guns, on P-40 antiaircraft mount rings on the roofs of gun turrets.

The engine of the T-28 tank – V-shaped M-17T of the 450-500 hp. MBV-2 transmission was also based on the T-28 units, considering the conditions of the forward-movement. Armored railcar was equipped with radio station 71-TK-2 and intercom SPU-7r.

MBV-2 took part in the Soviet-Finnish war in 1939. It has begun its participation In the Second World War in July, 1941. As a part of different armored divisions it had defended Leningrad till 1943 and in the same place several times undergoing repairs. On January 24, 1943 MBV-2 was included in 14 ODBP, it was assigned No. 684 and given the name “Stremitel’nyj” (“Swift”). In the summer of 1943 MBV-2 had been rearmed, replacing L-11 guns with 76 mm of tank’s F-34, and after small modernization was again directed to the Leningrad front. 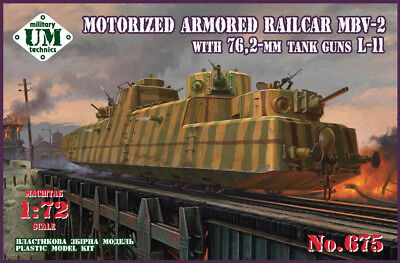 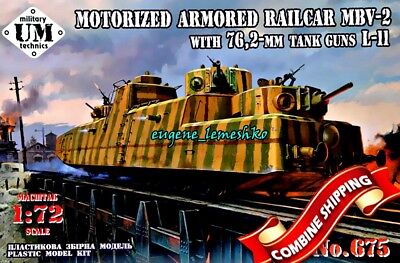