The armored train of the 48th ODBP (armored division) No. 1 “Death to the German invaders”

The armored train of the 48th ODBP (armored division) No. 1 “Death to the German invaders” was formed and built in the USSR in 1942 in the Ilyich depot of the Western railroad. It included armored locomotive of type Ov (not hardened armor of 30-45 mm, armament consisted of DShK machine gun) and four armored platforms No.899, No.909, No.903 and No.904 (the hulls with the turrets of T-34 tanks, closed outside by not hardened armor of 30-33 mm, have been installed on platforms). Armament of each – 76-mm tank gun F-34 and three DT machine guns and air defenses platforms of the “Stalmost” plant with two 25 mm antiaircraft guns.

From summer, 1942 to fall, 1943 it participated as a part of the 48th separate battalion of armored trains in combat operations on the Volkhov front. It had defended stations and bridges from air raids and had made fire raids on enemy ground targets. On December 5, 1942 the armored train got new No. 681.

In 1944 as a part of the Leningrad front took part in combat operation on lifting the siege of Leningrad, further on August 5, 1944 it was transferred to the 3rd Belarusian front. Before the end of war, the armored train “Death to the German invaders” was in the ranks and has been disbanded in 1946. During the war, 70% of the personnel, for the shown heroism and courage in fights with aggressors, have been awarded by fighting orders and medals. 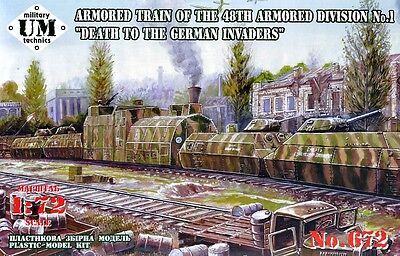 UM-MT 1/72 Armored Train of the 48th Division No.1 Death to the German Invaders

UM-MT 1/72 Armored Train of the 48th Division No.1 Death to the German Invaders