7,5 cm German infantry gun IG 37
7,5 cm German infantry gun IG 37 (as 7,5 cm anti-tank PaK 37) was designed in 1943. These were light guns mounted on split-trail carriages. To create I.G.37 Germans used gun carriages of outdated 37-mm anti-tank guns (both own Pak 35/36, and trophy Soviet 1-K (3,7 cm Pak 158 (r)) were used). The barrel was taken from IG 42. The guns had the separate loading, close to the Soviet gun angle of vertical targeting and considerably bigger angle of horizontal targeting and were 200 — 300 kg easier than the Soviet ones.The gun could be used not only as the regimental cannon, but also as means of fight against tanks. The powerful anti-tank shell which pierced 85 mm armour at right angle was used. The first 84 guns were assembled in June, 1944. Totally there were made 1304 of such guns during the war. 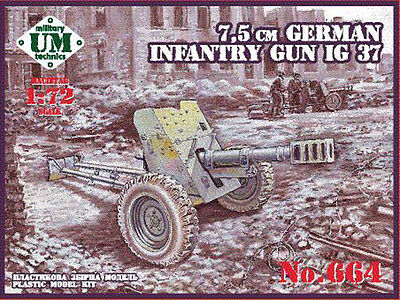