As always Roden provides a good background about the model:
At the beginning of the twentieth century, at a time when the United Kingdom was the main country of the world and its capital London was the center of political and economic activity on a global scope, due to the rapid pace of urbanization of large cities, the problem of carriage of groups of people became a fundamentally new means of transport, as typical horse-drawn carriages (the so-called “cabs”) could no longer cope with this task in full.
This is how a fundamentally new mode of transport has emerged — the omnibus, or bus in the modern sense of the word. Already in 1910, the London General Omnibus Company (LGOC) was established and soon occupied a dominant position in the field of transportation. Already in 1911, at its request, designer Frank Sierle created the design of the vehicle, which for many years became a “business card” of the city on the Thames. It was a two-story bus with stairs between floors, which significantly reduced the size of the vehicle while being able to transport a large group of people. The new bus was called “Type B” and was operated with considerable commercial success in the following years.
The Type B was able to transport up to 34 passengers — 16 on the first level and another 18 on the second “floor”, which was not covered by any roof, which apparently did not facilitate travel during bad weather, but allowed for a good view from the height of several feet from the surface. The first buses did not even have headlights, which caused some danger during their operation in the dark, but in 1912, all previously built buses, along with the new ones, received an electric lighting system.
The maximum speed of the bus was 16 miles per hour, but almost immediately the London police set a speed limit of 12 miles for reasons of traffic safety in the city. Immediately with the advent of a new mode of transport, an extensive itinerary network was created, and in this context the only transport was cabs that carried passengers solely by the modern principle of taxi transportation. Currently, passengers have been able to get from one end of the city to another on a specific route, knowing in advance the bus schedule of a particular route.
In the coming years, nearly 2,500 B-type buses have been built, and their use has become larger and larger.
The First World War, which began in the summer of 1914, prompted the search for means of rapid movement of large groups of soldiers as close as possible to points of contact with the enemy. The military leadership immediately became interested in the possibility of using omnibuses, and soon the first Type B machines were already in the army. In total, from October 1914 to March 1915, 300 Type B buses were requisitioned, which had to change the cobblestone streets of London to France’s dirt-bombed roads.
Former civilian drivers from London were now forced to become military drivers, and bus operations, which involved the rapid transfer of groups of soldiers to the front, were quite dangerous given the possibility of shelling by the enemy, and therefore the transport of troops was carried out mainly at night.
After the end of World War I, a large number of omnibuses returned to their hometown, with the Main Bus Company redeeming them for the second time in the army, and they again began to dominate the streets of London as the main vehicle of mass use. 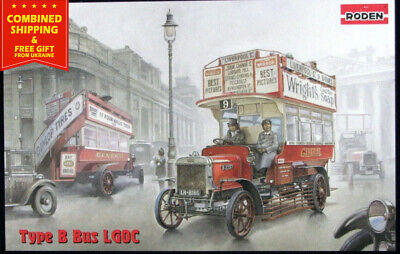 Showing 3 of 29 results found at Ebay. Click here to see all.