Roden provide us a good approach to this vehicle: At the end of 1941 German military commanders were staggered by the first use in battle of the Soviet BM-8 and BM-13 ‘Katyusha’ rocket launchers, and demanded a similar machine from weapon developers for the requirements of their own army. After less than a year of testing the Sd Kfz.4/1 Panzerwerfer 42 joined the armament of the Wehrmacht. It featured a ten barrel 158mm caliber rocket launch system designed by Rudolf Nebel, mounted on the chassis of the well-known Opel Maultier halftruck
This vehicle soon showed itself to be a very effective weapon it even surpassed its Soviet predecessor in accuracy of firing. However, the handling of the 158mm rounds was also associated with many difficulties, not least due to the large caliber of the rockets. To provide the combat units with the necessary amount of ammunition during battle they even had to devise special transporters which carried additional 158mm rockets for the rocket launchers.
At the end of 1943 in the SS Troops Academy research center in the city of Brunn another type of rocket launch system was developed, although it would be difficult to call it fundamentally new. Evidently, the simplicity and lightness of the design of the Soviet M8 82mm rocket impressed the designers. The German equivalent was a close copy of the Soviet design, except for the method of fastening of the stabilizing fins to its body – they were angled in such a way that the rocket made a spinning motion when fired. Clearly, rockets with tail fins could not fire from a tubular-type launcher, as in the previous Panzerwerfer 42, and that is why the designers again followed the Soviet example using rail guides made out of a flange beam.
A pre-production model was fitted with 48 rails bearing 96 rockets, but such a construction appeared to be too bulky. On production machines only two rows were fitted, with 12 guide rails each, i.e. a single firing volley consisted of 48 rockets.
The first machines arrived at the Front in 1944 and initially they were used exclusively by SS units. German soldiers gave the nickname of ‘Himmler Organ’ to these machines, because of the unique noise heard during rocket firing (by analogy with the nickname for the Soviet machines, ‘Stalin Organ’).
In comparison with the Soviet ‘Katyusha’ the German 8cm launch rocket systems had a greater efficiency and accuracy of firing, but they yielded considerably to the Panzerwerfer 42 with 158mm caliber charges, and that is why these machines had very limited battle usage and were built in negligible quantities even compared with the 158mm Panzerwerfer 42, which in turn was built in far smaller numbers than the Soviet ‘Katyusha’. Some of these machines were used in defensive battles on the territory of Germany in 1945, however such cases were exceptional, and this particular weapon type never gained regular use. 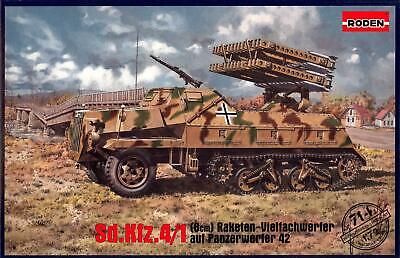 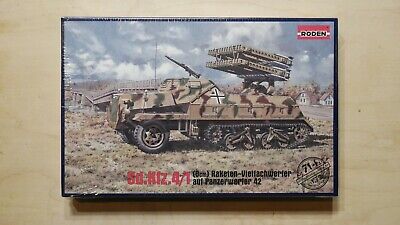 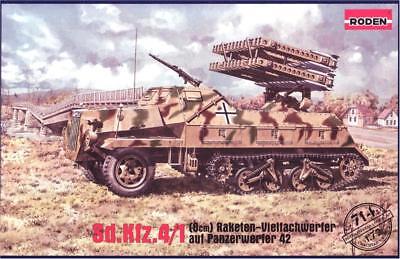