Curiously, this not common 251 variant, has been light two times this year, as Italeri also has released the same variant… coincidence?

This medium armoured fighting vehicle, 16,000 of which were built from 1938, was the main combat vehicle and armoured personnel carrier of the German mechanised infantry in the Second World War. The Sd.Kfz 251/16 type C, so-called “flame thrower”, was equipped with two lateral 14 mm flame thrower 42s and two MG 42s. Flammable oil was pumped through spray nozzles and ignited. The flames had a maximum range of 40 m. 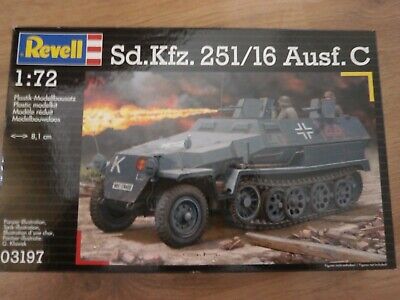