CDL (Canal Defence Light) tank was the next of the “miracle weapons” emergent at the time of World War II. In assumption it had to be the mean of battle enabling effective conduct of the combat activities in night conditions; its searchlight had to illuminate the targets, and in the same time disorient the enemy dazzled by its light. CDL was constructed in Great Britain in research center which was named “DDT” (Department Dirty Tricks), engaged in constructing the most unbelievable “inventions” for the purposes of British Army and Allied Troops.

Historical background:
CDL (Canal Defence Light) tank was the next of the “miracle weapons” emergent at the time of II World War. In assumption it had to be the mean of battle enabling effective conduct of the combat activities in night conditions; its searchlight had to illuminate the targets, and in the same time disorient the enemy dazzled by its light. CDL was constructed in Great Britain in research center which was named “DDT” (Department Dirty Tricks), engaged in constructing the most unbelievable “inventions” for the purposes of British Army and Allied Troops. On the tank hull the armoured turret was mounted, equipped with the searchlight operator stand and the mounted inside carbon-arc searchlight of 13 million candles power (12.745.000 candelas), powered by the batteries and generator mounted in the tank hull. As far as primarily the CDL turrets with the slit searchlight armed with the machine gun were mounted on the hull of Infantry Tank “Matilda Mk II”, the armament of such built vehicle proved decidedly insufficient.

The solution was the mounting the CDL turret on the hull of the American Medium Tank M3 “Lee/Grant”, armed with the 75 millimeter cannon mounted in side-sponson. Such built vehicle could effectively fight not only the enemy’s living power, but even his battle vehicles. The vertical armoured slit of the searchlight had the dimensions of 2 inches (5.1 cm) for 24 inches (61 cm), which had to make impossible the destroying of the turret optical system by the handgun bullets and artillery fragments. The light beam emitted through the slit radiated itself by the horizontal beam with broad of 19° and height of 1,9°, creating the trapezoidal “field of death” broadness of, from 34 to 340 yards (31 x 310 meters), on the distance of 1,000 yards (910 m). The turret could rotate 360°, while searchlight lens could direct the light beam up and down in a scope of 10°.

But the searchlight of the CDL tank served not only for the illumination of the terrain. In its construction used were filters in two, especially matched colors; blue and emerald, simultaneously special shutter could rhythmically open and close the searchlight slit in twice per second cadence. Application of the blue filter in the night conditions offered impression that the CDL tank occurred farther from the observer than in reality; simultaneous focusing on the target the two of light beams (emerald and blue) from the two tanks caused enlightening it by the sharply white light which dazzled the enemy eyes. Blinking light (white) had such assorted frequency that fully blinded and disoriented enemy preventing his eyes from repeated quick adaptation as well as to the light, as to the darkness, preventing the sight accommodation.

The CDL Tanks project was surrounded in such great secrecy that they were tested in field conditions only in 1943 at the times of “Exercise Primrose” on the training ground Tighnabruaich in Scotland. In the effect of demonstration military officials stated that CDL system is “too uncertain to be depended upon as the main feature of an invasion” British CDL Tanks were grouped in the 11 Royal Tank Regiment, formed in January 1941, and designated for the activities with CDL Tanks in May of this Year. Regiment (in power of tank battalion) trained in Lowther Castle in vicinity of Penrith in Scotland, and stationed in Brougham Hall in Cumberland County.

In 1942 and 1943 Regiment stationed in the Middle East, although not taking part in the combat, and after the return to Great Britain, in April 1944, initiated the preparations for landing in Normandy. It landed on the Continent in August 12th 1944 in the composition of the 79th Armoured Division, and did not take part in the combat up to September 29th, when received the order to pass the equipment to 42 and 49 Royal Tank Regiment. 49 Royal Tank Regiment was one of two 79th Division battalions equipped in armoured tracked infantry carriers “Kangaroo” and “absorbed” only one squadron of the CDL Tanks, which had to support its infantry in the combat in night conditions, but battalion CDL’s were not used in combat up to operation of Rhine crossing, when they were liquidating the German fire nests on the east bank of the Rhine and enlighten the terrain at the time of building the pontoon bridges on the Rhine in British beachhead area.

3 results, showing 3.*Note that box can be different depend on the year of production, some times wrong products appear in the results, be aware. 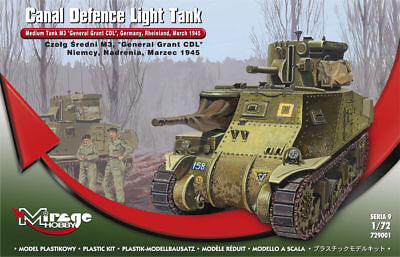