Dragon’s 1/72 scale plastic kit of the Panzerfähre (PzF) Prototype Nr.I won the ‘Kit Magazine’ award in 2012, and a Prototype Nr.II kit soon followed. An exciting new variation on the theme is being released in the same scale, this time depicting Nr.II with a Fährendeck. The Panzerfähre was an amphibious tractor based on the chassis of a Panzer IV Ausf.F tank, and when working in tandem with another PzF, it created a floating ferry platform capable of carrying a 24-ton load. It could thus transport armored vehicles over water obstacles such as rivers or lakes. Unfortunately, because heavier tanks were appearing on the scene at the time of its development, the PzF never went into production because of its inadequate payload.

The new 1/72 scale set includes the PzF (Prototype Nr.II) released previously. The kit makes clever use of parts from Dragon’s Panzer IV models – for example, the wheels, suspension and tracks. Details such as hull rivets are delicately rendered, while slide molds are widely used to improve the quality of molding detail. Modelers will thus find the vehicle assembles easily. The other half of the kit is devoted to the Fährendeck pontoon, which is obviously a brand new tooling. For those modelers who previously bought a PzF kit, this new combo allows them to recreate a river-crossing scene with a full ferry complement. As illustrated in the box-top artwork, the finished item will look spectacular. Furthermore, this scale is ideal for a river or riverbank diorama.

See on Ebay »
Shipping to: Worldwide
From: US-Woodbridge,VA,USA 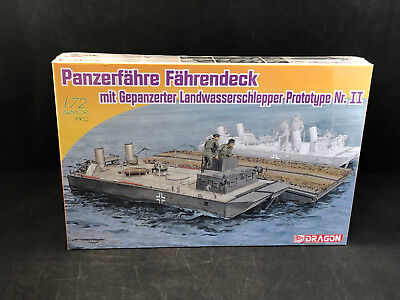