SU-85i
Model has been prepared in our “Profi” standard. Model contains basic plastic parts with resin casted parts for easier construction. Decals for “what if” versions included
SU-85i project was directly following the serial production of SU-76i. In early 1944 it was clear that gun 76.2 mm is not enough to fight with modern German tanks. The new gun caliber 85 mm was selected for T-34 tanks and SU-85. Success of the SU-76i lead to the decision equip these vehicles with the new gun as well. The adjustment was simple – front hull was modified for the new mask of massive cannon. The contruction was , which is directly based on the mask used on self-propelled gun SU-85. The design was completed but producion has not started, neither prototype was build. The reason was simple – stopped availability of Panzer III chassis. Flow of captured chassis stopped because the German Army excluded Panzer III from the first line and exchange it by more modern vehicles. And so the whole cnstruction remained only on paper. 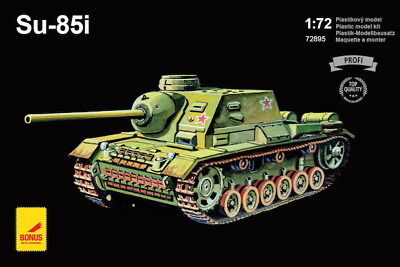