Valentine MkII
The Valentine tank was produced in the United Kingdom (and Canada under license) during the Second World War. More than 8,000 of the type were produced in 11 different marks plus various purpose-built variants, accounting for approximately a quarter of wartime British tank production. Used by British & Commonwealth forces, it also saw service in the Russian army.

Perhaps the only romantically named tank of the war, one of the most popular explanations was that the design was presented to the War Office on St. Valentine’s Day, 14 February 1940; another version suggests that the tank was called Valentine in honour of Sir John Valentine Carden, the man who led the development of the A10 and many other Vickers vehicles; another that it is an acronym for Vickers-Armstrong Ltd Elswick & (Newcastle-upon) Tyne and finally that it was just the next code name destined to be used.

The tank first served in Operation Crusader in the North African desert, when it began to replace the Matilda Tank. It was extensively used in the North African Campaign, earning a reputation as a reliable and well-protected vehicle; its thick armour and 2pdr, which at the time was an excellent anti-tank gun and more than a match for its Italian opponents and Panzer I, II and early Panzer IIIs of the Afrika Korps

However, as the later MkIII panzers, and PzIVs came into action in Africa, and especially as more 88s were deployed the need to upgun it was identified.

The Valentine shared the common weakness of the British tanks of the period: its 2-pounder gun lacked high-explosive (anti-personnel) capability, and soon became outdated as an anti-tank weapon too. Although versions with the 6-pounder and then with the Ordnance QF 75 mm gun were developed, by the time they were available in significant numbers better tanks had reached the battlefield. Another weakness was the small crew compartment and the turret for only two men. A larger turret with a loader position added was used in some of the 2-pounder versions, but the position had to be removed again in variants with larger guns.

By 1944 the Valentine had been almost completely replaced in front-line units of the European Theatre by the Churchill and the US-made Sherman. In the Pacific the tank was employed in limited numbers at least until May 1945.

In Soviet service the Valentine was used from the Battle of Moscow until the end of the war. Although criticized for its low speed and weak gun, the Valentine was liked due to its small size, reliability, and generally good armour protection.

Due to the basically sound design of the hull and running gear the Valentine was used as the basis of a number of specialist vehicles, notably the self-propelled 17-pdr Archer and the self-propelled 25-pdr Bishop. The first DD swimming tanks were built around the Valentine, and various mine-clearing, flame-throwing and bridge-carrying versions were built, though the perfected designs were then applied to other tanks such as the Sherman or Churchill. 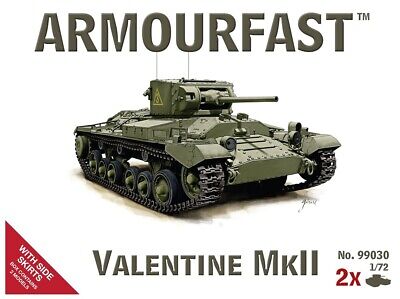