Typ-770K (W-150) offener Tourenwagen, also known as the Großer Mercedes (large Mercedes) was a large luxury car built by Mercedes-Benz from 1930 to 1943. The 770K (Kompressor) was substantially revised in 1938, resulting in the new internal designation of W150. Offener Tourenwagen was an Open Tourer body by in-house coachbuilder Sindelfingen. It has bullet-resistant glass and the body is armor-plated. Most known owners: Emperor Hirohito of Japan, the King of Norway, Field Marshal Mannerheim, Portuguese dictator António de Oliveira Salazar, General Franco.

This kit contains PE parts as well as 2 hard-plastic figures. 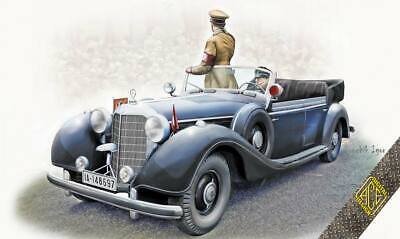