To give ace pilot Poe Dameron an edge in combat, Resistance engineers have fitted a boosted accelerator pod onto the tail of his T-70 X-wing. This gives him the extra speed he needs to outrun and out maneuver the First Order

So.. Revell pays the royalties to Disney to produce Star Wars kits.. and, they decide to build some on 1/78 scale.. some in 1/70 scale, some in 1/72 scale.. some in other scales.. and meanwhile reissue their own old kits with different code numbers.. re-issue Italeri kits as if they were new.. and.. fuck off.. who rides this company ? obviously some one who don’t care about us, who don’t care about market, who don’t care about products.. just some one who read “Disney” word and see films.. and doesn’t know anything about scale models.. lies for today, careless for tomorrow, the quick money way. Later they will say scale models market doesn’t work, and they don’t do enough money. They will not say , fuck how i did so wrong. Those are my thoughts while i add these products to the listings. What a pity. 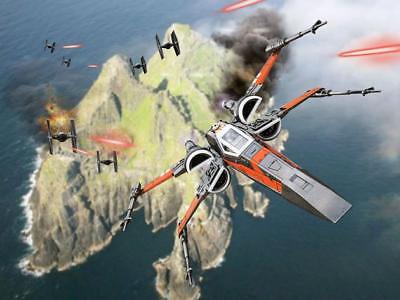 See on Ebay »
Shipping to: Worldwide
From: IT-Italy
Store: ilcavalieredellarete