Apollo 8 holds an unrepeatable record – it was the first human spaceflight to leave the Earth’s orbit. This occurred on December 21 1968, when a Saturn V SA-503 rocket launched it into space from the Kennedy Space Center in Florida. It reached the far side of the Moon, a destination that took three days to reach. Its place in history doesn’t stop here, for it was also the first manned spacecraft to return to Earth from the Moon, after orbiting the Moon ten times! The enormous success of NASA’s Apollo 8 mission paved the way for Apollo 11, where the USA achieved the goal of first landing man on the Moon.

Dragon previously launched its Apollo 7 in 1/72 scale, and its space program has taken another giant leap forward. This time the Apollo 8 Command Module is also appearing in the same scale. The fully built-up and pre-painted Apollo 8 spacecraft is the second 1/72 scale in Dragon’s space series, and it certainly lives up to the standard set by the earlier model spacecraft. It is full of detail, and the colors are an excellent match to the original craft as it looked during its famous flight in 1968, an event that captured the most television viewers ever up till that time. To display the miniature replica of this historic craft, Dragon supplies a stylish stand. In the form of Apollo 8, Dragon offers spaceship fans a fine second item in its out-of-this-world collection! 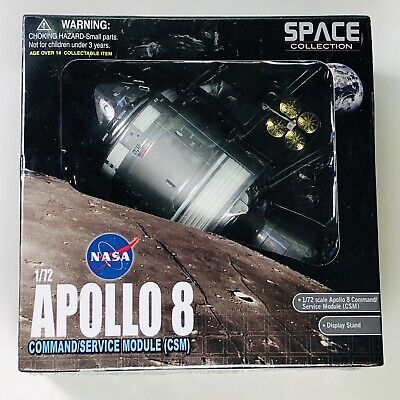 See on Ebay »
Shipping to: Worldwide
From: US-Castaic,CA,USA