This is a model of one of the most famous flying boats in the history of aviation. The Mk.III variety was built and saw service during the war times, being introduced to operational use in the turn of 1941-42.

Compared with the earlier versions, it featured an improved hull step and was equipped with power-operated gun turrets. Because of its long range capabilities and heavy armament, the type proved a very dangerous opponent to Kriegsmarine u-boats which was also able to defend itself against long range fighters of the Luftwaffe.

These abilities are very well illustrated by the chosen airframes in the kit, two of which can boast with a sunk submarine and the crew of the other managed to defend themselves against eight attacking Ju 88s, shooting down three of them in the end

See on Ebay »
Shipping to: Worldwide
From: JP-Japan
Store: S.Y.J.14 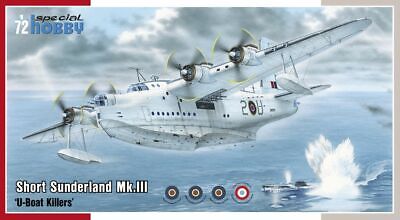