The first prototype of the Ar 65 was powered with the BMW VI engine. With further minor modifications the fighter entered production at Warnemunde as the Ar 65 E, carrying an armament of two 7,9 MG 17 machine guns. The reklamme Staffel, which was officially designated JG 132 an march 1935, began to receive the He 51, operating this type alongside the Ar 65 until, in 1935 the later was the Ar 65 transferred to the DVS Jagdfliegerschule at Schleissheim to serve in the fighter training role.

Early of the war were Ar 65 used by lutwaffe to traing role also by A/B schule at Olmutz, Prostnitz and Pilsen.

In year 1942-43 were Ar 65 used by Erganzungs-Schleppgruppen 1 and 2 to towed gliders DFS 230 carrying troops from the Kuban bridgehead in Russia.

In year 1937 were some machines sold to Bulgaria, here used to the training role. 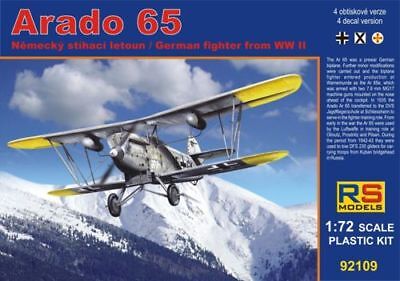