Experimental tailless bomber with two M-22 engines, yet another step on K.A.Kalinin’s way towards his dream – rocket-powered supersonic flying wing aircraft. Light bomber carried crew of three. Construction – welded steel tube frame with fabric cover. Each wing was a single piece construction, fuselage was assembled from three sections. Center sections of full-span slatted ailerons served as an elevon.
Aircraft could carry 500kg bomb load inside, defenses were provided by two turrets (navigator/bombardier and tail gunner).
Prior to aircraft assembly 1/2 scale glider was built, and flown almost 100 times, proving the reliability of the air dynamic scheme.
At Fall 1936 P.M.Stefanovski took the K-12 into the air. End-plates were found inefficient at low speeds, minor stability problems were encountered. But the designer’s goal was reached: he proved that tailless aircraft may serve as a multi-role front-line aircraft: light bomber (including chemical weapons), artillery spotter, photo-reconnaissance, transport-paramedic. After minor factory refinements K-12 was put in production.
Confidence in the K-12 was so high, that the experimental aircraft was included in Tushino parade fly-past on August 18, 1937. Painted in impressive feather-pattern, it was presented under nickname ‘Zhar-ptitsa’ (Fire-bird).
Ten K-12 were built, production was cancelled when K.A.Kalinin fall victim of Stalin’s purges 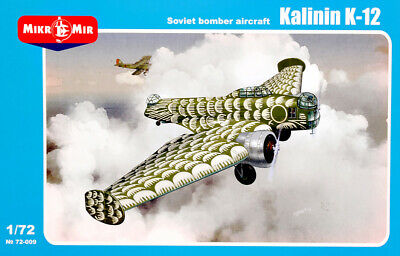 See on Ebay »
Shipping to: Worldwide
From: JP-Japan
Store: Tokimatsu-Shouji