Design work on Tupolev’s first large aircraft, the twin-engined ANT-4, began before the first flight of the ANT-3. It was built on the second floor of a former Moscow merchant’s house which formed part of the TsAGI premises. The walls had to be knocked down and the components taken to the Central Aerodrome for assembly before the seven-minute first flight on 26 November 1925.
A cantilever low-wing monoplane powered by two 336kW Napier Lion engines, the prototype TB-1 or Tupolev ANT-4 made its maiden flight on ski landing gear on 26 November 1925. Intended mainly for the heavy bomber role, the ANT-4 was of all-metal construction with corrugated metal sheet covering and a glazed nose section.
The second aircraft was the true TB-1 bomber prototype; flown initially in July 1928 it had a redesigned nose section with ‘balcony’-type gunner’s cockpit and a crew of five including three gunners, and was powered by two 544kW BMW VI engines. A third prototype, designated ANT-4bis, had revised engine nacelles and increased armament.
The first series machine was completed as a propaganda aircraft; named Strana Sovietov (Land of the Soviets) it was equipped for a staged flight across Siberia and on to New York but was soon damaged severely in a forced landing. A second aircraft was prepared and completed the journey, using wheels or floats as appropriate, and this second Strana Sovietov (URSS-300) covered 21242km between leaving Moscow on 23 August 1929 and arriving in New York on 1 November.
In its production form, as the TB-1 heavy bomber, the ANT-4 was armed with three pairs of 7.62-mm DA machine-guns, in the nose and two dorsal positions. Two hundred and sixteen were produced at the former Junkers concessionary factory at Fili, Moscow, which had been taken over by the Soviet authorities in July 1926.
Production of the TB-1 continued until August 1932, a total of 152 being delivered plus 66 TB-1P twin-float bomber/torpedo seaplanes.
The TB-1 was also used in a number of experiments, including autopilot and drone trials, inflight refuelling of other aircraft, rocket-assisted take-offs, and cargo parachute drops. It was the first twin-engined all-metal cantilever monoplane to enter production in the world. 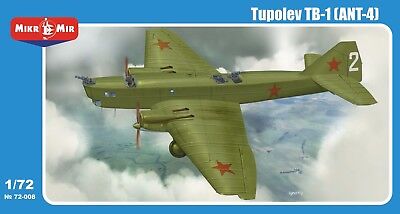 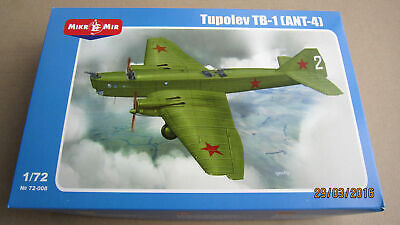 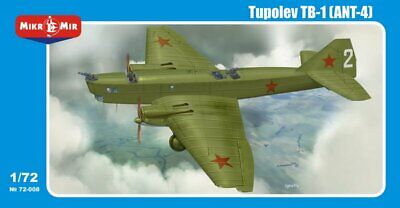