The Yakovlev Yak-11 (NATO reporting name: “Moose”, Russian: Як-11) was a trainer aircraft used by the Soviet Air Force and other Soviet-influenced air forces from 1947 until 1962. The Yakovlev design bureau began work on an advanced trainer based on the successful Yak-3 fighter in mid 1944, although the trainer was of low priority owing to the ongoing Second World War.[1] The first prototype of the new trainer, designated Yak-UTI or Yak-3UTI flew in late 1945. It was based on the radial-powered Yak-3U, but with the new Shvetsov ASh-21 seven-cylinder radial replacing the ASh-82 of the Yak-3U. It used the same all-metal wings as the Yak-3U, with a fuselage of mixed metal and wood construction. Pilot and observer sat in tandem under a long canopy with separate sliding hoods. A single synchronised UBS 12.7 mm machine gun and wing racks for two 100 kg (220 lb) bombs comprised the aircraft’s armament. An improved prototype flew in 1946, with revised cockpits and a modified engine installation with the engine mounted on shock absorbing mounts. This aircraft successfully passed state testing in October 1946, with production beginning at factories in Saratov and Leningrad in 1947. Production Yak-11s were heavier than the prototypes, with later batches fitted with non-retractable tail wheels and revised propellers. A 7.62 mm ShKAS machine gun was sometimes fitted instead of the UBS, while some were fitted with rear-view periscopes above the windscreen. In total, Soviet production amounted to 3,859 aircraft between 1947 and 1955. with a further 707 licence-built by Let in Czechoslovakia as the C-11. The Yak-11 set five world-class records.
Since in 1959 the aircraft of the Second World War in the ranks left, Yak-11 has mastered the profession of an actor – acting in films of military subjects. But the presence of a second cockpit fighter poorly match the image on the screen. Therefore, in 1959. seven of the Yak-11 were converted into single beds. We had sewn up the second aircraft cabin, installed new lights. Debut of this modification of the Yak-11 was the film “Baltic Sky” (1959) and in 1960. aircraft took off in the Soviet-French film “Normandie-Niemen” 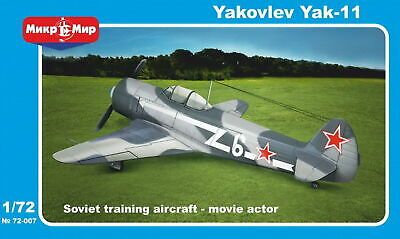 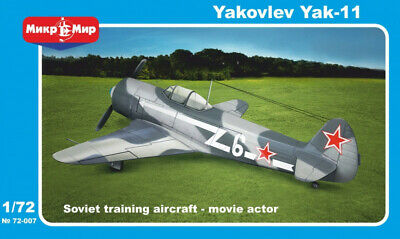