A fighter similar to the D.XIII, and indeed inspired by it, was built in Russia and completed in late 1940. Aleksandr Moskalev had started to develop aircraft around the MV-6, a Russian version of a Renault six-cylindre in-line engine, around 1936. Apparently this was less out of choice than because he was denied more powerful engines, but the SAM-13 made the best of it. It had a short, flat-sided fuselage with MV-6 engines at front and rear, and twin tail boom carrying an elliptical horizontal tail with, very unusually, a single tail fin in the middle. The sharply tapering wing was small, a mere 9 square meters in area. The compactness was strictly necessary because the MV-6 developed only 270 hp. The all-wooden (except for the engine bearers) SAM-13 was very light, 754 kg empty. The armament included two synchronized ShKAS machine guns and two more in the wings.
During test flights, the SAM-13 demonstrated a top speed of 560 km/h at 4000 m, which was no small achievement and only slightly slower than the prototype of the Yak-1. Development was abandoned after the German invasion in the summer of 1941, and the prototype was destroyed before the design bureau was evacuated to the east. Whether the SAM-13 would have been able to achieve the 680 km/h at 4000 m claimed for the design, remains forever an open question. It was lightly armed and powered by engines that were not known for their reliability. For the USSR it made more industrial sense to develop the new Yakovlev and Lavochkin fighters, which were also small and mostly of wooden construction, but powered by the more successful M-105 engine which had far more development potential. 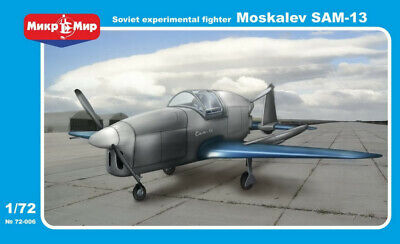 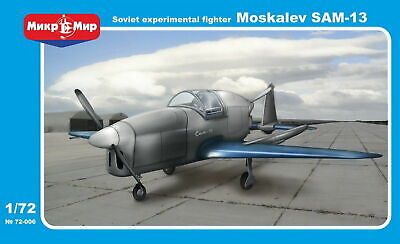 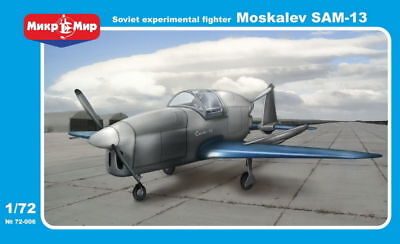