British tank Vickers E Mk. A (made for Poland).

6-ton tank “VICKERS” was developed in England in 1928-29 by the company “VICKERS – ARMSTRONGS”. The machine has been successfully sold to many countries. In particular, there was an order from Poland. On September 16, 1931 Poles ordered 22 twin-turret and 16 one-turret machines, but also, purchased the license for production of the tank. Purchased Vickers Mk. Е mod. A tanks differed from basic English version by slightly modified form of the machine-gun turrets adapted for setting of the machine guns “Gochkis” used in the Polish army. This twin-turret version of the tank was intended for infantry support. The tank had riveted of armored sheets (8-13th) hull in which units and aggregates of the tank were placed. On top of the hull two turrets with a possibility of rotation around the axes were mounted. A machine gun was mounted in each turret. The power unit was equipped with 4-cylinder engine of 80 h.p. (it was replaced in Poland with 110 HP Zaurer diesel). Poland used its design as basic for development and creation of the armored forces. These tanks took part in fights with Germans. 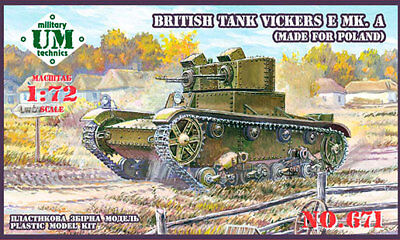 Vickers "E" Mk. A, British tank (made for Poland) 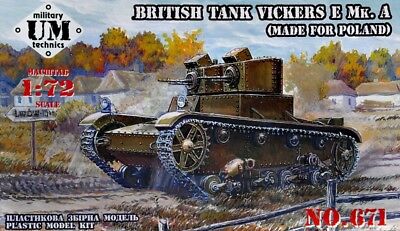